We get quite a few questions that come in to us here at Limmer Education. Over the past year we have had several questions about using tattoos instead of medical alert devices. A quick search on the topic found that medical identification tattoos appear to be quite popular.

The question is whether they are as identifiable as a medical alert device.

In a July, 2014 USA Today article, Don Lundy from the National Association of EMTs says “We’re not going to stop to read a tattoo in an emergency situation…” I disagree. It isn’t unusual for me to disagree with the NAEMT. And to be fair, they aren’t the only organization that has made a similar statement.

I disagree for a number of reasons. First, I think that tattoos are as easy to spot as a bracelet—especially when they are designed and applied properly. I also think there may be a generational issue at play. Tattoos seem to be more popular in younger generations. We old timers may just need to get with the game. Just because we wouldn’t think to tattoo the fact that we are a diabetic on our wrist doesn’t make it invalid. 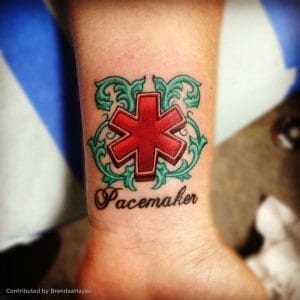 If you are considering a tattoo as a medical alert device I would like you to consider the following:

If you are an EMS provider reading this I have one piece of advice for you:

Consider tattoos when you are looking for medical identification “devices.” They are out there—and some are very cool.